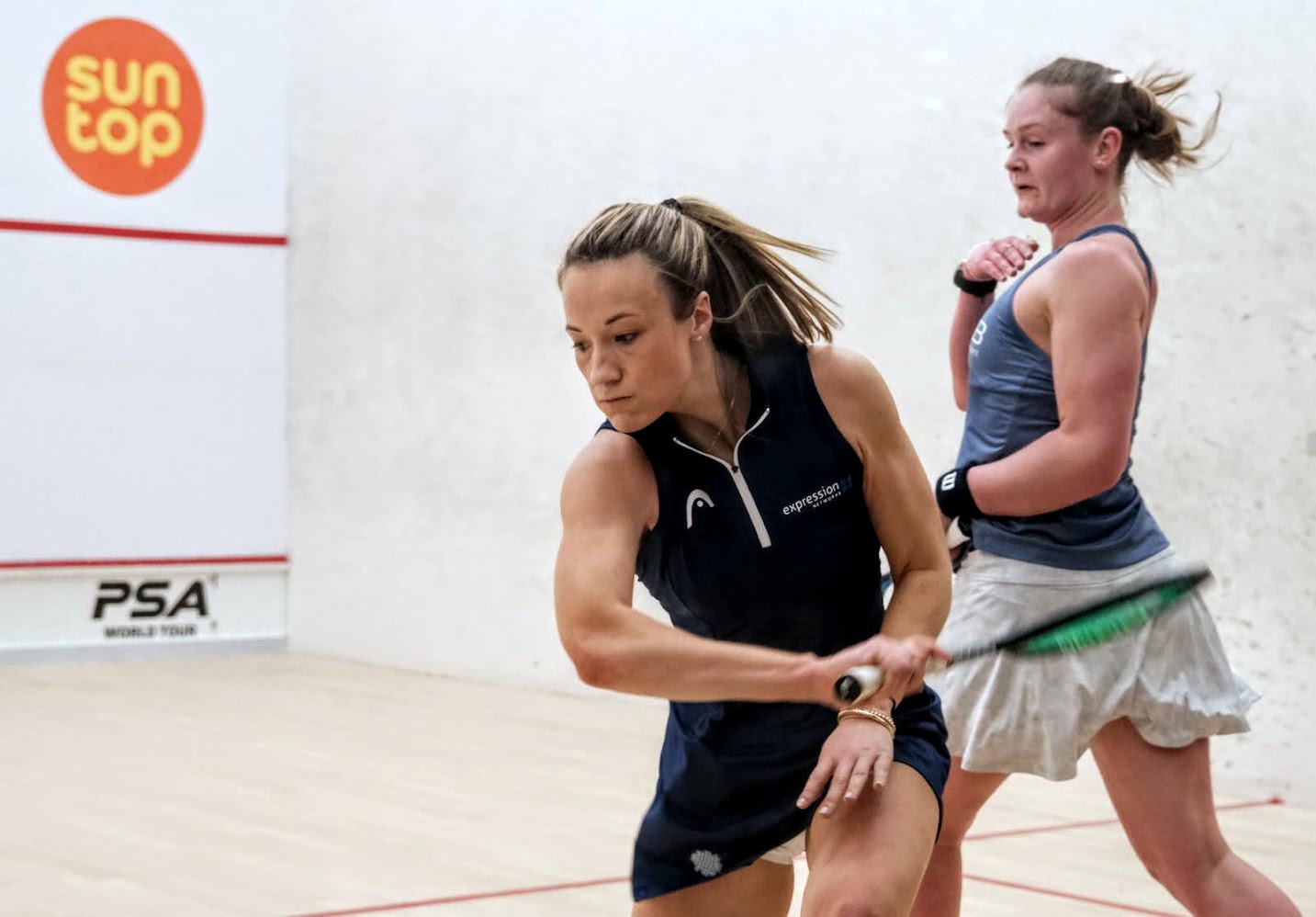 “I feel really great about that win. The last time we played she beat me decisively, so I was really excited for this matchup. I know that I’ve improved a lot since then and I was excited just to go out there and try and get through, try to use all the work that I’ve done to get the best of her.

“I’m really pleased I was able to do that, she’s a really strong player and we’re not too far apart in the rankings and we both really wanted to get through to the third round. I’m very pleased.

“I think, starting the match, I had those first match jitters and was just trying to ease my way in. Once the match got going I could be more aggressive and trust my game. I’m going to have to have full trust I’m myself and my gameplan to beat [Gohar] tomorrow, and I’ll need to enjoy myself.” 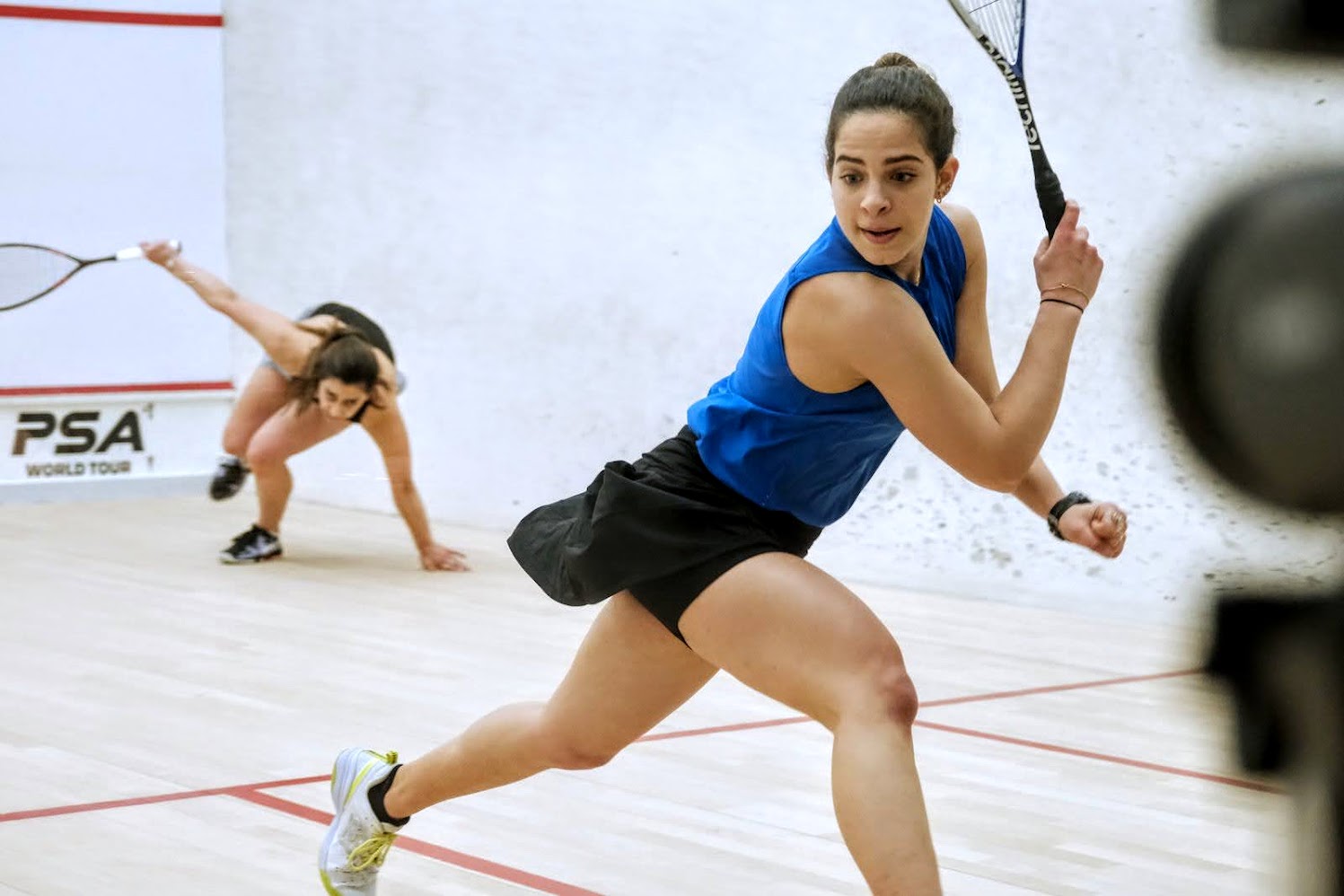 “Nadine and I go way back, we’ve been playing since juniors. We’ve played each other a thousand times at least, so we’re used to each other’s game.

“So, today, with all the loud noises, I just had to stay focused and stick to keeping the pace quick and hold my racket more. Maybe in my last game, I was playing too quickly, but I’m pleased to be through.” 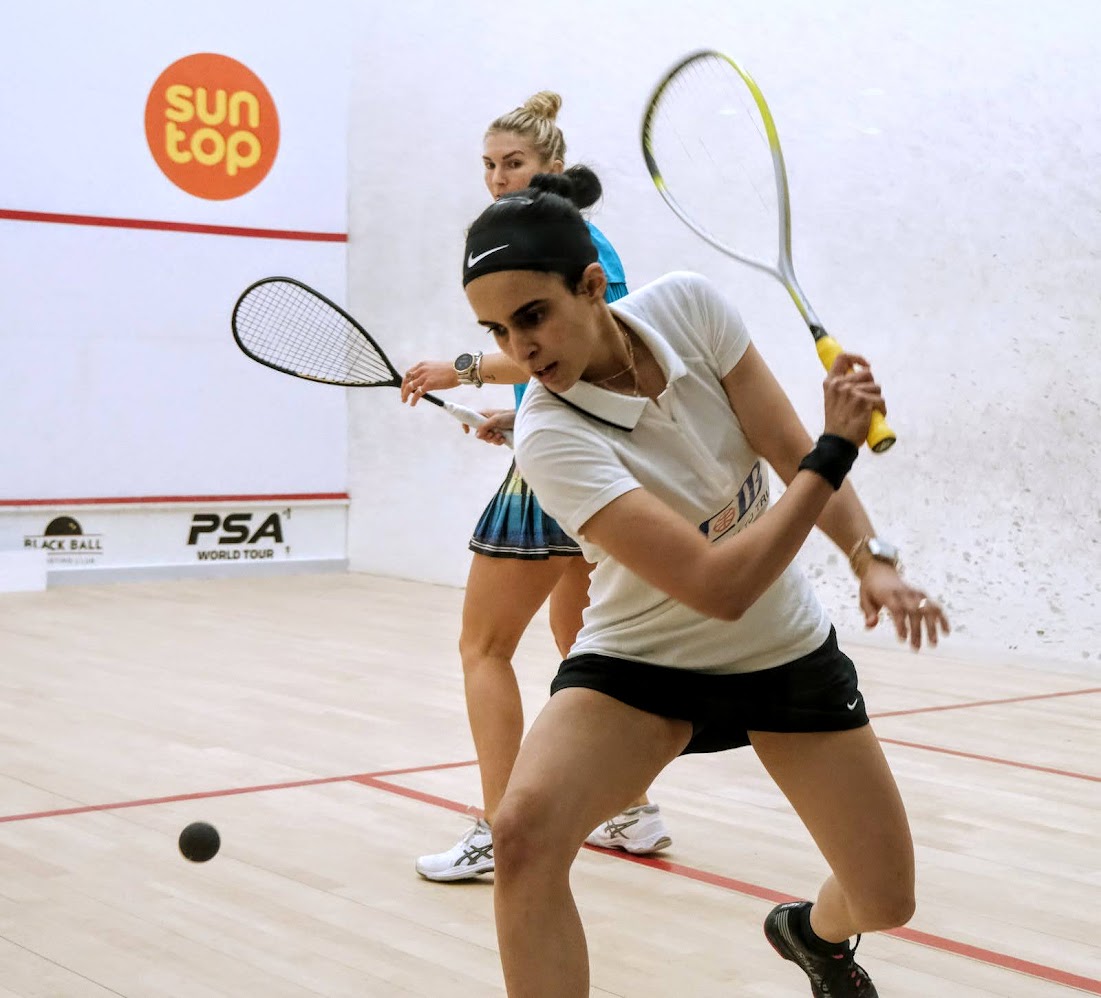 “It’s always nice to play in Egypt with my family around. Having [husband and men’s World No.2] Ali [Farag] around helps me big time.”

“I’ve always told Alex she’s very tricky and very good. She’s been playing really well recently, and I know she’s been doing well. I really like her game so I was very nervous today before the match and I think I played very well. I did very well to win in three especially. Two of the games were very close, well they were all very close! So I’m happy to come out with the win.” 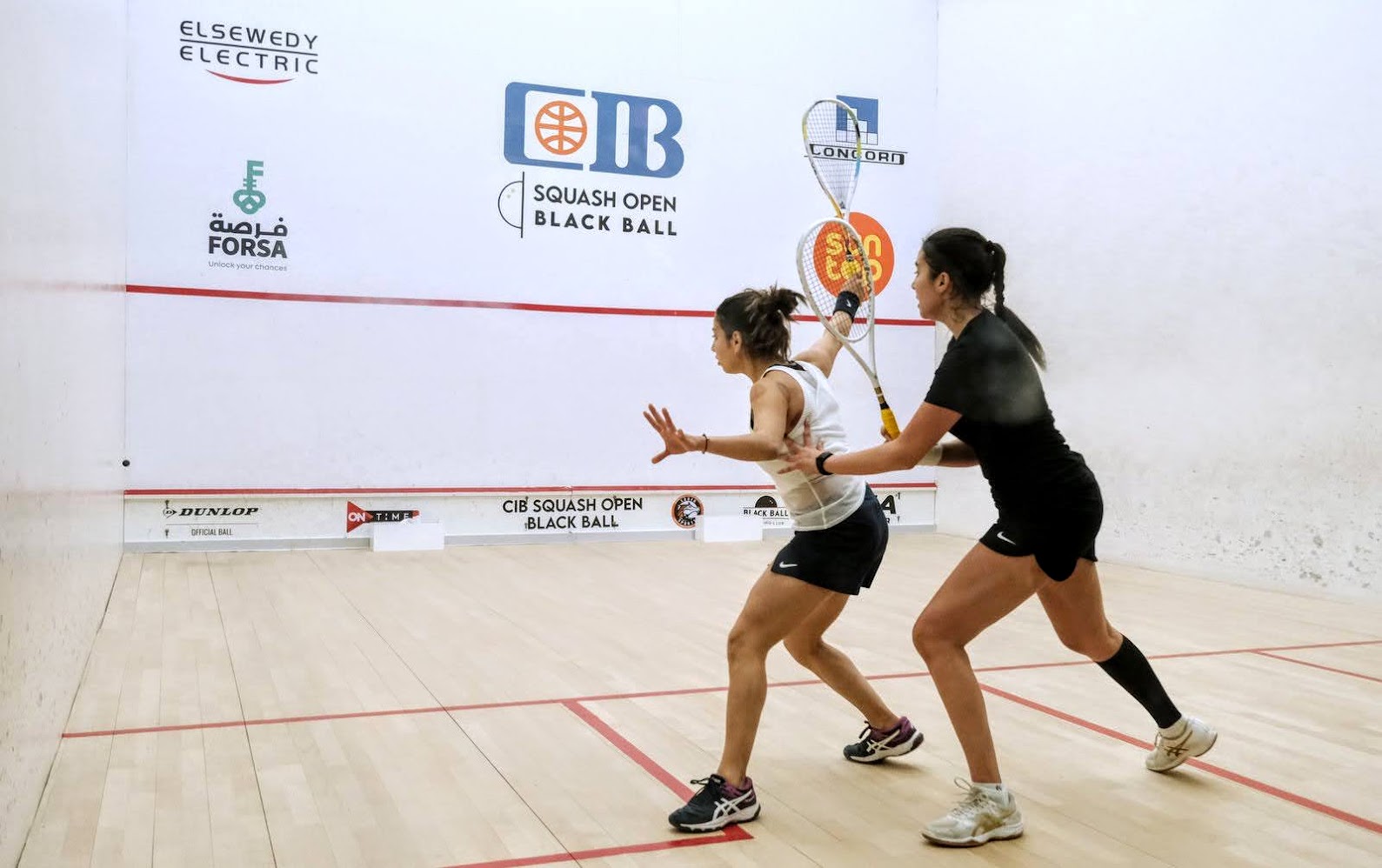 I had a strain in my right hip since Chicago against Millie, that’s why I retired against Hania in the third game, I probably shouldn’t have played that match… My doctor told me not to play this BlackBall event, but I had rested it quite well, I didn’t play for two weeks, just bed and physio every day.

But I just wasn’t comfortable with my movement yesterday and today, while Nada moves so well. So yes, probably not a good idea to play this one, but I had to. 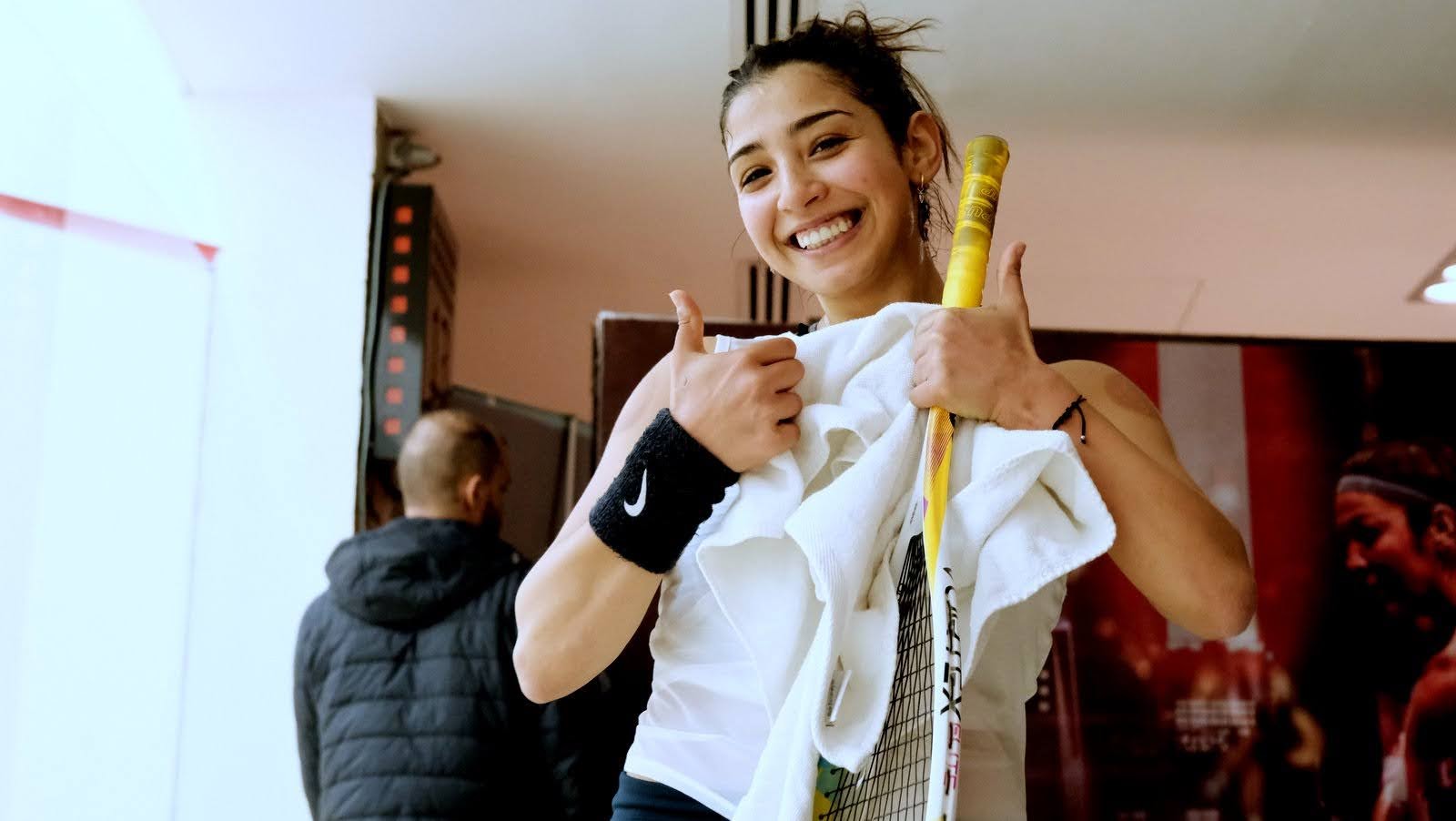 “I’m really happy to get the win today, coming into today’s match I knew Mariam was a very tough player. She’s very skilful, so I was just trying to stay in the rallies and make them long so she’d have to work harder, I wanted to make the match as long as possible. I’m really happy I’m through and looking forward to the next match.”

Commenting on the large group of friends and supporters who had come to cheer her on, she said: “Coming from 1-0 down you need someone to support you, so they were helping. I’m really happy they came and supported me.”

Home wildcard Jana Shiha produced the shock of the day to come from two games and match ball down to stun Welsh World No.17 Tesni Evans. In her first-round match against Tze Lok Ho, World No.55 Shiha’s attacking volleys proved a potent weapon. Evans, though, was able to neutralise this threat early on, pushing the ball deep whenever possible to take the first two games 11-3 and 11-5.

The Welshwoman appeared on course for a routine 3-0 win when she took a 10-8 lead in the third, only for Shiha to save both match balls and force a tie-break. The 20-year-old then saved a further match ball at 11-10, before flipping the game on its head with a 14-12 win.

The 20-year-old stormed out in the fourth game to the delight of the fans watching, and she took the match to five games with an 11-6 win.

With momentum and the crowd truly behind her, Shiha continued to press relentlessly in the fifth game. As Evans began to tire, Shiha’s devastating range of attacking shots increasingly found their mark, and the World No.55 walked off the court to rapturous applause as she sealed a memorable victory with an 11-8 win. “I have no words! After being 2-0 down, I don’t think I’ve ever come back from 2-0 down, even in juniors, so I’m very very very proud of how I managed to win today! It was my first time playing Tesni so I didn’t know how to react.

She’s very talented and her shots are amazing, so I knew this was going to happen. In those first two games, she really bagelled me. Usually, I let go of the whole match, but I didn’t today, for the first time which is a plus. In the third game I tried to hold onto the basic game, but then I had to attack. I tried to take as many volleys as I could, I tried to do my shots. 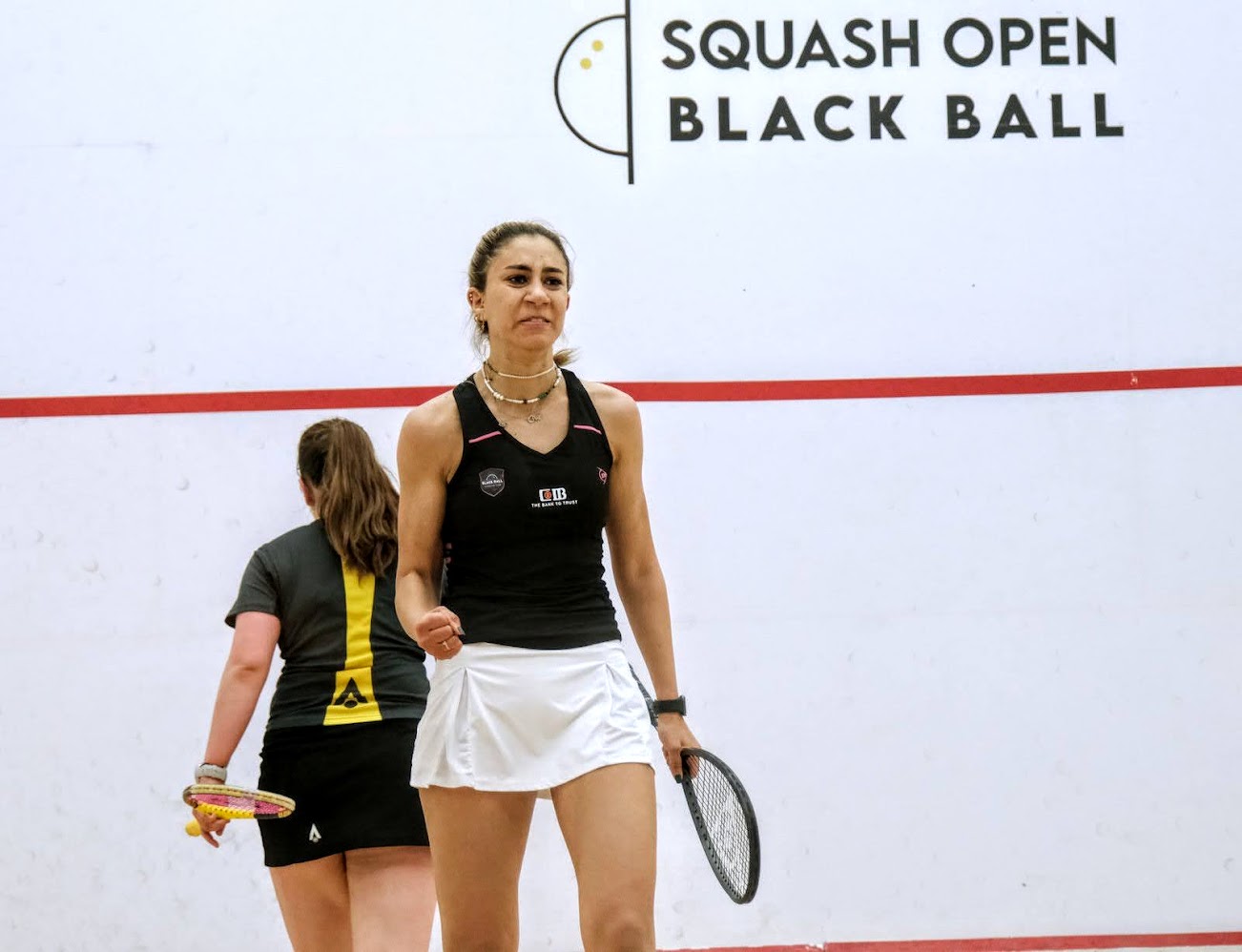 “Honestly, I didn’t expect this. I wasn’t training my best, but I had confidence because I’m at my home club. I didn’t want to let my home crowd down, so I’m on the right track and I hope tomorrow I play as well as today.”

On her next opponent, No.8 seed Rowan Elaraby, she said: “I’ve never played Rowan in an official match, but we’ve played as juniors. I’m very excited and confident. It’s my first time reaching the third round, which is a plus, and my home club, which is a second plus.

So I’m positive about tomorrow, let’s hope it goes my way.”

India’s Joshna Chinappa thwarted a thrilling comeback from Egypt’s Zeina Mickawy to collect her 250th tour win and set up a third-round meeting with either Amanda or Sabrina Sobhy. In the pair’s first meeting on tour, the match was at times cagey as the pair worked each other’s game out.

World No.14 Chinappa took the first game 11-5, before World No.29 Mickawy responded by taking the second 11-6. Chinappa took the third relatively comfortably, and looked to be coasting into the next round when she led 10-7 in the fourth game, only for the Egyptian to launch a shocking counter attack.

First, Mickawy levelled, chipping away Chinappa’s three match balls to level with high-risk high-reward squash. Chinappa had further chances to finish the match, with the Indian holding a further three match balls, only to be frustrated on each by the determined Mickawy.

After levelling the game once more at 14-14, Mickawy was able to add to Chinappa’s frustrations, as she levelled the tie with a remarkable 16-14 win.

In the fifth, Chinappa again occupied a dominant position, with the World No.14 having another four match balls at 10-6 up. While Mickawy was able to save two of these, should could not repeat the heroics of the last game, with Chinappa sealing the match win an 11-8 win.

“I feel really relieved. Zeina kept coming back every time I had the lead and made me panic a bit at those moments. I’m glad I could close it out in the fifth. I didn’t have doubts at the end of the fifth game, I just tried to focus on getting back and playing my game. She’s so good at targeting the nick, so I was trying to be a little more prepared for that.

“[To have 250 tour wins] means that I’ve been on tour for too long! It feels great playing on the tour, especially how it is now with all the great changes that have happened. I feel very privileged to be here.”

“Olivia and I are close friends, it was really tough mentally to push. I knew it was going to be a tough match, we both are very physical players so I’m honestly just really glad to have got through that one. It’s my first win over her, too.

“When I was leading in the second game, I lost focus and went a bit passive. But I knew if I kept pushing and stop being passive I’d be able to pull through.”